Mechanical Player Load™ using trunk-mounted accelerometry in football: Is it a reliable, task- and player-specific observation? 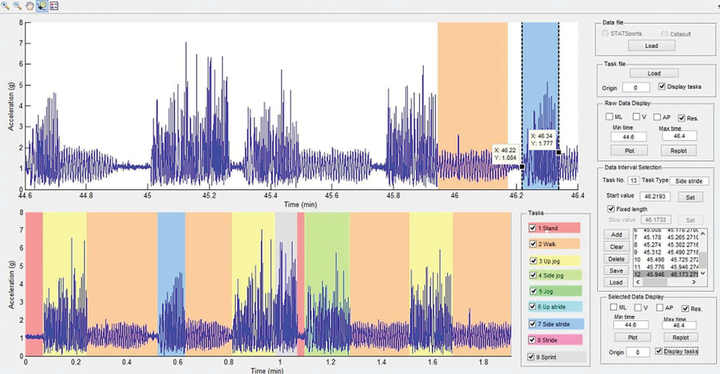 The aim of the present study was to examine reliability and construct convergent validity of Player Load™ (PL) from trunk-mounted accelerometry, expressed as a cumulative measure and an intensity measure (PL · min–1). Fifteen male participants twice performed an overground football match simulation that included four different multidirectional football actions (jog, side cut, stride and sprint) whilst wearing a trunk-mounted accelerometer inbuilt in a global positioning system unit. Results showed a moderate-to-high reliability as indicated by the intra-class correlation coefficient (0.806–0.949) and limits of agreement. Convergent validity analysis showed considerable between-participant variation (coefficient of variation range 14.5–24.5%), which was not explained from participant demographics despite a negative association with body height for the stride task. Between-task variations generally showed a moderate correlation between ranking of participants for PL (0.593–0.764) and PL · min–1 (0.282–0.736). It was concluded that monitoring PL® in football multidirectional actions presents moderate-to-high reliability, that between-participant variability most likely relies on the individual’s locomotive skills and not their anthropometrics, and that the intensity of a task expressed by PL · min–1 is largely related to the running velocity of the task.