Age-Related Deviation of Gait from Normality in Alkaptonuria 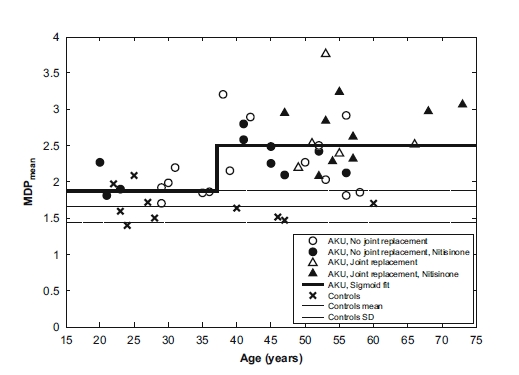 Alkaptonuria is a rare metabolic disease leading to systemic changes including early and severe arthropathy which affects mobility. For unknown reasons, the onset of degenerative changes is delayed to around 30 years of age when both objective and subjective symptoms develop. In order to complement description of the structural changes in alkaptonuria with measures of movement function, clinical gait analysis was added to the list of assessments in 2013. The aim of this study was to describe the deviation of gait from normality as a function of age in patients with alkaptonuria. Three-dimensional movement of reflective markers attached to joints were captured during walking in 39 patients and 10 controls. Subsequent to processing the data to emphasise the shape of marker trajectories, the mean Movement Deviation Profile was generated for all participants. This single number measure gives the deviation of a patient’s gait from a distributed definition of gait normality. Results showed that gait deviation roughly follows a sigmoid profile with minimal increase of gait deviations in a younger patient group and an abrupt large increase around the second half of the 4th decade of life. Larger variations of gait deviations were found in the older group than in the younger group suggesting a complex interaction of multiple factors which determine gait function after symptoms manifest. Continued gait analysis of adults with AKU, extended to younger adults and children with AKU, is expected to complete understanding of both the natural history of alkaptonuria and how interventions can affect movement function.